How to Get Involved

There are many ways to get involved in SPD outreach activities. You can become and active member of the SPD EPO Committee, help support the SPD Booth at meetings, and participate in AstroZone & Exploration Station when at the next SPD, AAS, or AGU meeting. We hope to increase the number of outreach opportunities available to SPD members over the years.

The Solar Physics Division (SPD) has formally approved the creation of a standing Education and Public Outreach (E/PO) committee. An exploratory committee composed of various SPD members, was established and tasked with writing a proposal for such a committee including a charter and mission statement to help guide the founding E/PO committee members in the implementation of an SPD E/PO program.

The Solar Physics Division of the American Astronomical Society runs an exhibit booth display when the SPD meets in conjunction with larger societies, such as the American Geophysical Union (AGU). The main purpose of the booth is to provide information about the SPD and solar physics, in general, to the broader community of scientists. 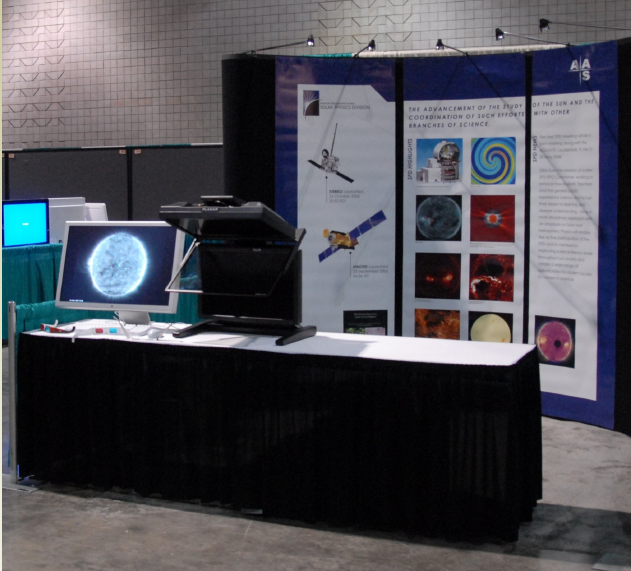 The SPD booth fosters collaborations between scientists from a wide range of disciplines from astrophysics to climatology and geology. It inspires students of solar and heliospheric physics while providing a venue for information on solar physics graduate programs and employment throughout the international community. The booth promotes the study of the science of the Sun and how it affects the environment around our home planet. The display is dynamic but over the past several years, it has shown representative artwork and elements provided by many government, university, and industrial research facilities.

The SPD booth is an excellent avenue for getting involved in the solar physics community. Volunteers who staff the booth during meeting events take the opportunity to share experiences with members of the broader science community. Several organizations support the display with content, artwork, and staffing. The booth allows members of the SPD to share their enthusiasm and show others the breadth of work involved in the field. It is vital that as many organizations as possible have input to the booth.

There are several ways to be involved with the SPD booth, including:

[We are grateful to Lockheed Martin Corporation for providing structure and logistics support for the booth display. Other institutions are welcome to assist in this area.]

[Assistance is needed in gathering and preparation of artwork and content.]

[If you would like to spend an hour or two of your time to staff the booth during the SPD meetings, there will be a sign up sheet available. Most activity around the booth will be during coffee breaks and lunch hours, though there are almost always people walking through the exhibits during the day.]

There may be additional opportunities for using the booth or the content at meetings of other science organizations or branching into other activities at SPD stand-alone meetings. We're looking for new ideas. Share your thoughts with us.

The next stand-alone meeting of the SPD will be in Boulder, CO in June 2009. The next opportunity for the SPD booth will be the joint meeting with the AAS in May 2010 in Miami, FL.

AstroZone and Exploration station are free public events held the weekend prior to the summer and winter AAS meetings and the fall AGU meeting respectively. During the four-hour open house, local families, students, and teachers can learn about the cool science currently being done by both communities. During the event, attendees have a chance to meet scientists, take part in hands-on activities, and collect lots of astronomy-related resources to take home.

AstroZone and Exploration Station are run by the Association for Astronomy Education, the Rochester Institute of Technology Insight Lab, and NASA's Solar Dynamics Observatory.

How can you participate? We are always looking for exhibitors. You can host your own exhibit or partner with other colleagues. We are also always looking for volunteers to help us out and interact with the public. The more the general public is exposed to members of the community the better!