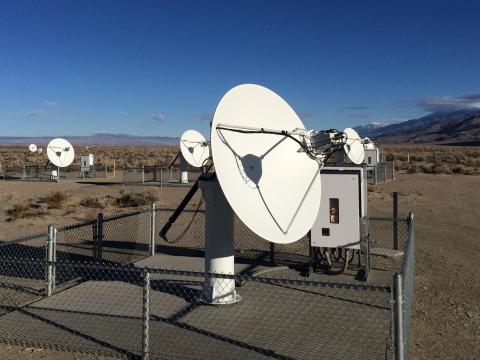 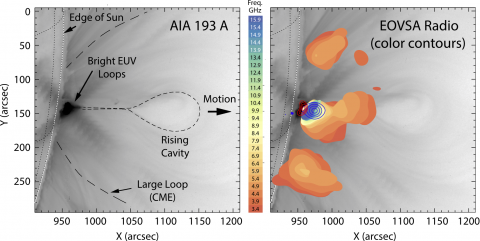 Last September, a massive new region of magnetic field erupted on the Sun’s surface next to an existing sunspot. The powerful collision of magnetic fields produced a series of potent solar flares, causing turbulent space weather conditions at Earth. These were the first flares to be captured, in their moment-by-moment progression, by NJIT’s recently expanded Owens Valley Solar Array (EOVSA).

With 13 antennas now working together, EOVSA was able to make images of the flare in multiple radio frequencies simultaneously for the first time. This enhanced ability to peer into the mechanics of flares offers scientists new pathways to investigate the most powerful eruptions in our solar system.

“These September flares included two of the strongest of the current 11-year solar activity cycle, hurling radiation and charged particles toward Earth that disrupted radio communications,” said Dale Gary, distinguished professor of physics at NJIT’s Center for Solar-Terrestrial Research (CSTR) and EOVSA’s director. The last flare of the period, on September 10, was “the most exciting,” he added.

“The sunspot region was just passing over the solar limb – the edge of the Sun as it rotates – and we could see the comparative height of the flare in many different wavelengths, from optical, to ultraviolet, to X-rays, to radio,” he recounted. “This view provided a wonderful chance to capture the structure of a large solar flare with all of its ingredients.”

Radio emissions are generated by energetic electrons accelerated in the corona, the Sun’s hot upper atmosphere. Modern solar physics relies on observations at many wavelengths; radio imaging complements these by directly observing the particle acceleration that drives the whole process. By measuring the radio spectrum at different places in the solar atmosphere, especially when it is able to do so fast enough to follow changes during solar flares, it becomes a powerful diagnostic of the fast-changing solar environment during these eruptions.

EOVSA, which is funded by the National Science Foundation, is the first radio imaging instrument that can make spectral images fast enough – in one second – to follow the rapid changes that occur in solar flares. This capability allows the radio spectrum to be measured dynamically throughout the flaring region, to pinpoint the location of particle acceleration and map where those particles travel. Images of solar flares at most other wavelengths show only the consequences of heating by the accelerated particles, whereas radio emission can directly show the particles themselves.

“One of the great mysteries of solar research is to understand how the Sun produces extremely high-energy particles in such a short time,” Gary noted. “But to answer that question, we must have quantitative diagnostics of both the particles and the environment, especially the magnetic field that is at the heart of the energy release. EOVSA makes that possible at radio wavelengths for the first time.”

“EOVSA’s new results have sparked lots of interest at the TESS meeting,” said Bin Chen, assistant professor of physics at CSTR, who is chairing a session focused on the intense solar activity that occurred last September. “A number of experts at the meeting commented that these results would add fundamentally new insights into the understanding of energy release and particle acceleration in solar flares.”

Among other discoveries, scientists at EOVSA have learned that radio emissions in a flare are spread over a much larger region than previously known, indicating that high-energy particles are promptly transported in large numbers throughout the explosive magnetic field "bubble" called a coronal mass ejection (CME).

“This is important because CMEs drive shock waves that further accelerate particles that are dangerous to spacecraft, astronauts and even people in airplanes flying polar routes. To date, it remains a mystery how these shock waves alone accelerate particles, because the physics is not understood,” he said. “One of the theories is that "seed" particles must be present in the shock region, which can generate the waves necessary for further acceleration. It has long been speculated that flares, which are known to accelerate particles, may provide them.  Previous observations, mainly with X-rays, always show those particles confined to very low heights and it has not been understood how such particles could get to the shock. The radio images show evidence for particles in a much larger region, giving them more opportunity to gain access to the shock region.”

Sunspots are the primary generator of solar flares, the sudden, powerful blasts of electromagnetic radiation and charged particles that burst into space during explosions on the Sun’s surface. Their turning motion causes energy to build up that is released in the form of flares.

EOVSA was designed to make high-resolution radio images of flares (1-second cadence), sunspot regions (20-minute cadence), the full Sun (a few per day) and hundreds of frequencies over a broad frequency band, making it the first solar instrument able to measure the radio spectrum from point-to-point in the flaring region.

“We are working towards a calibration and imaging pipeline to automatically generate microwave images observed by EOVSA, and make them available to the community on a day-to-day basis,” added Chen, who is leading the EOVSA pipeline effort.

“The most unexpected revelation so far from EOVSA is what we see at the lowest radio frequencies,” Gary noted. “Observations of flares based on high radio frequencies and based on X-ray observations show a flare that is a relatively small, compact region even though we see evidence for heating over a much larger area. Although we had rare observations from the past that seemed to show large radio sources, EOVSA has now made it routine to image large radio sources that are even bigger at lower frequencies.”

Initially, he and his colleagues were unable to tap into these new regions, however. After the array was completed, they realized that cell phone towers in the Owens Valley were causing much higher levels of radio frequency interference than expected. As a result, they designed "notch" filters that were able to cut out the frequencies most affected by cell towers.

“This is important because a lot of interesting solar radio bursts occur in the cell tower range (1.9-2.2 GHz). It is the lower frequencies that best show this new and not well understood phenomenon of large sources,” Gary said. “Somehow, the accelerated particles are being transported to a much greater volume of the corona than we thought.”

With new funding from NASA, Gary and colleagues will measure the spatially-resolved radio spectrum of solar flares, determine the particle and plasma parameters as a function of position and time, and then use 3-dimensional modeling, which his group has developed, to fully understand the initial acceleration and subsequent transport of high-energy particles.

The Sun goes through 11-year cycles of activity, and this past year may have provided the last flares we will see for the next four or five years,” Gary said. “For the next few years, we will focus our efforts on improving the active sunspot regions and full-disk images with the array. This imaging on a larger spatial scale is more challenging, but could be just as important, since the larger scale features govern the Sun's influence on the Earth's atmosphere and the solar wind.”

Fig 1: EOVSA radio intensity spectrogram of the 2017 September 10 solar flare, with frequency (vertical scale) and time (horizontal scale).  The time of the initial energy release is shown by the first vertical black line at 15:54 universal time, and the images at this time that are shown in Figure 2.  The other two vertical lines mark other times explored in detail in the paper Gary et al. (2018).

Fig. 2: Left panel shows extreme ultraviolet emission from the hot corona measured with the Atmospheric Imaging Assembly (AIA) instrument on the Solar Dynamics Observatory spacecraft at 15:54 universal time, in reverse gray scale (bright emission appears black, and dark areas are lighter gray).  At this time, a cavity outlined by dotted lines is rising rapidly in the direction of the arrow labeled "Motion", surrounded by a much larger loop that is also expanding rapidly for form a coronal mass ejection (CME).  In the right panel, the multi-frequency EOVSA sources are shown in multiple colors, with color corresponding to different frequencies according to the color bar between the panels.  The EOVSA sources at lower frequencies (red and orange) connect the bright AIA loops (shown black) with the rising cavity, and also have sources above and below the main source, associated with the legs of the CME.  At higher frequencies (green and blue) are localized just above the bright AIA loops.  A hard X-ray source due to hot plasma (20 million degrees) is shown with the red-lined contours, while a hard X-ray source due to higher-energy electrons is shown with blue-lined contours.  The hard X-ray data is from the Reuven Ramaty High Energy Solar Spectroscopic Imager (RHESSI) spacecraft.

One of only 32 polytechnic universities in the United States, New Jersey Institute of Technology (NJIT) prepares undergraduate and graduate students and professionals to become leaders in the technology-dependent economy of the 21st century. NJIT’s multidisciplinary curriculum and computing-intensive approach to education provide technological proficiency, business acumen and leadership skills. NJIT has a $1.74 billion annual economic impact on the State of New Jersey, conducts approximately $140 million in research activity each year, and is a global leader in such fields as solar research, nanotechnology, resilient design, tissue engineering and cybersecurity, in addition to others. NJIT is ranked #1 nationally by Forbes for the upward economic mobility of its lowest-income students and is among the top 2 percent of public colleges and universities in return on educational investment, according to PayScale.com.

The purpose of the AAS Solar Physics Division (SPD) is the advancement of the study of the Sun and the coordination of such research with other branches of science. The SPD holds annual scientific meetings, awards several prizes, and supports students in various ways.